This is a guide for Administrators to using role-based authorization configuration (RBAC) for projects and resources in Cortex Fabric.

In Cortex Fabric a combination of authentication and authorization is used to provide system security and user access.

Authentication and broad role-mapped authorization is managed through the customer IDP, which, using Dex, is configured to work with Fabric during instantiation. Customers manage Cortex users through their own IDPs.

During system installation IDP-established user-groups are mapped to general Fabric roles (e.g. administrator, developer, business user, and data engineer) to provide authentication and the first layer of authorization. In order to authenticate to Fabric Console, CLI, Python Libraries, and APIs a user must be in at least one group that is mapped to a Cortex role.

In addition a second more granular level of authorization can be configured by Cortex administrators using CLI RBAC commands to manage roles and grant or deny permissions to projects and/or resources. This page provides instructions for using the RBAC CLI commands. 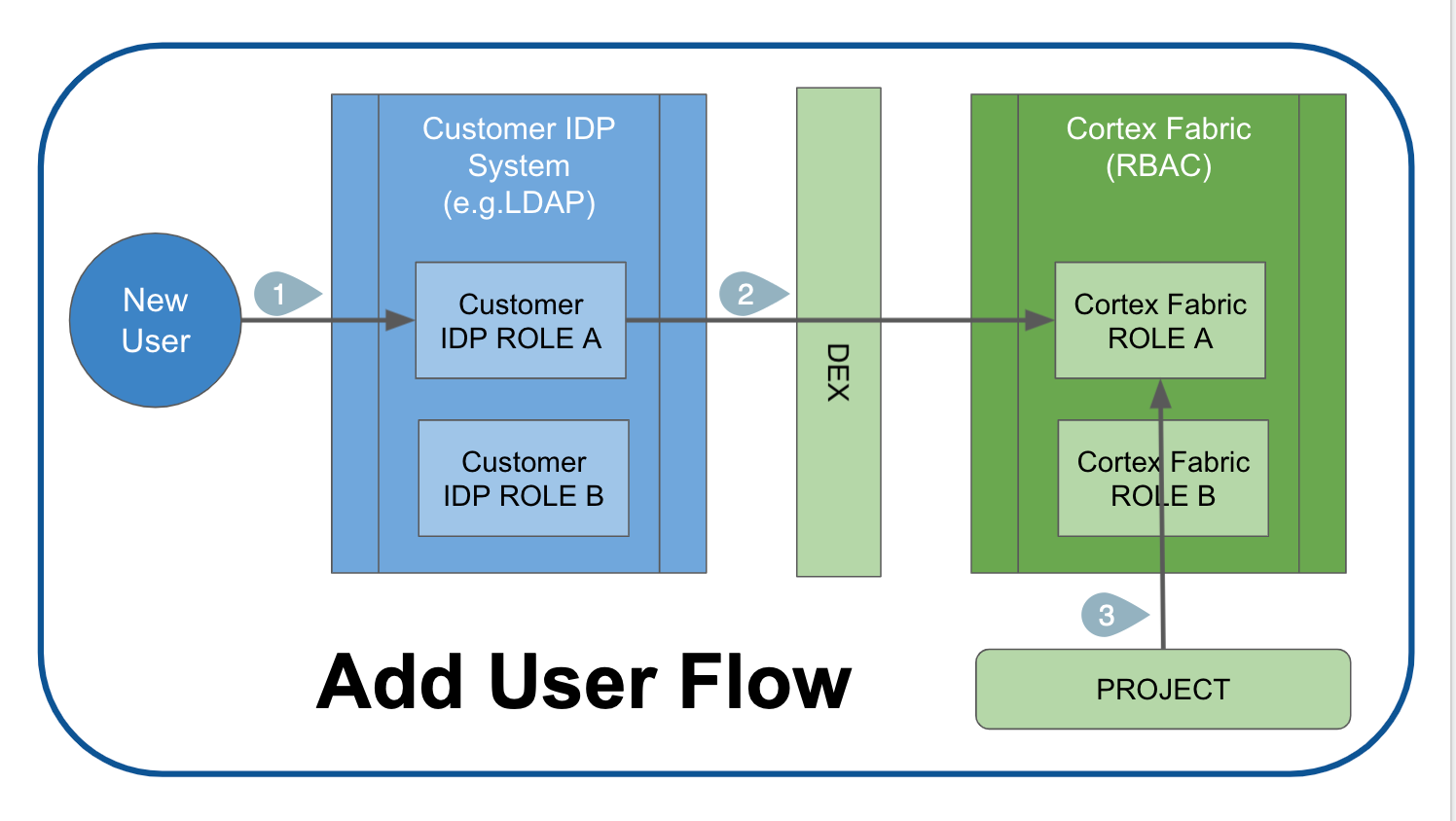 After users have been added to Fabric, Cortex Fabric Administrators can manage their access and permissions using RBAC rules and commands.

The following table shows the grants for Fabric default roles for some of the key resources.

In addition to these roles Fabric allows for custom roles and permissions to be created.

If you do not see a page or section of Console that you expect to see, it's likely that you do not have the appropriate grants for access. Check your permissions following the instructions below.

If you attempt to use a command or make an API call that you do NOT have grants for an error message is displayed.

A Cortex Fabric Administrator can grant access to Project for either users or roles. If a user belongs to a role that is given access to a project, the user is automatically granted access to the project.

To assign users or roles to Projects an Administrator must authenticate to the Cortex Fabric CLI and run:

To remove users/roles from Projects an Administrator must authenticate to the Cortex Fabric CLI and run the assign projects command appended with --delete:

If a user is assigned grants to a Project, they are automatically assigned to the Project.

To remove a user or a role from having access to a Project, you MUST explicitly remove the project, removing grants will NOT remove Project access.

RBAC CLI commands and returned JSON are structured to provide the following information.

When you execute a command related to grants the following elements are specified in this order:

You may specify a wildcard (wrapped) for any component to include all items '*'. Wildcards must be wrapped in single quotes.

DO NOT assign * to a RESOURCE for non-admin users. This will give them the ability to alter ROLES and USERS.

A Deny flag may be added to any of Grant commands.

DENY overrides any grants on the Resource/Action that may exist for the user or role.

For example: If a user with the developer role has been granted the ability to create agents, and the admin wants to deny that grant on a specific project, they would configure the denial as follows: cortex users grant user-email --project projectA --resource agents --actions WRITE --deny

Deny overrides all grants with one exception: If a role is assigned to a Project and a user is assigned to that role but is not assigned directly to the Project, the role's grants maintain priority over a DENY flag. To deny the user access you must add a deny flag to the role or assign the user to the project and then deny the user (if you don't want everyone with the role tobe denied access).

CLI commands for Roles are structured as follows:

Example: An Admin creates a role named "devops" with access to a project named "projectA" with the ability to read and write to all resources:

Users are identified by email address.

CLI commands for users are structured as follows:

Example: An Admin grants swinchester@email.com read access to all resources on all projects:

RBAC commands may be executed by administrators using the Cortex Fabric CLI.

In general the commands are structured as:

Query your own system permissions#

Users with any role may query their own permissions using:

Example response: Lists in this order your user-email, projects, all grants, all roles, and all external groups

Changes to external groups take place in real-time and user access is changed immediately upon executing the following commands.

Administrators may create custom groups for authentication mapping from external sources. These are considered types of roles.

When an external provider's groups are mapped to Cortex roles, an attempt is made initially to make a logical mapping using the information returned from the provider. For example if a GitHub provider has a group named "A1" and all the users are labelled developers, Cortex automatically maps "A1" users to the Fabric developer role.

Administrators are able to view the external roles and how they are mapped to Fabric roles using the CLI by running.

Administrators are able to get more information about the external provider roles using the CLI to run:

Where: --users: returns a list of users assigned the role --roles: returns the permissions assigned to the role

Assign an external group to a role#

Administrators are able to assign an external group to a role using the CLI to run:

Unassign an external group to a role#

Administrators are able to unassign an external group to a role using the CLI to run the assign command appended by --delete:

Remove an external group from the system#

Administrators are able to remove an external group from the system using the CLI to run: