This page lists feature deprecations and migrations along with the steps you need to follow to manage these changes.

The CLI command cortex generate is being replaced by cortex workspaces and VS Code Cortex Developer Extension. Because of this change, the Skill building process has changed as follows: 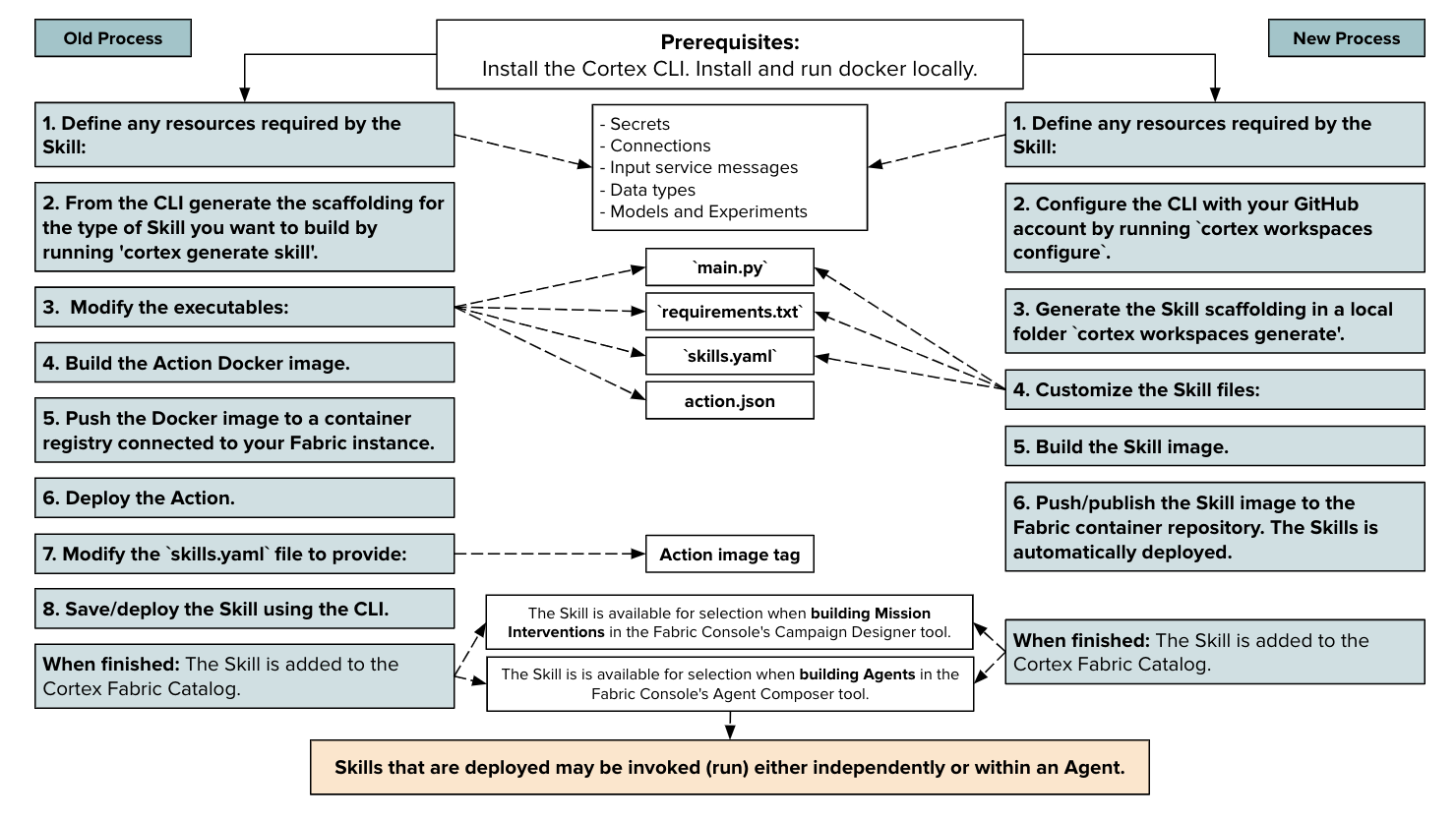 Several other changes you should be aware of are described below: 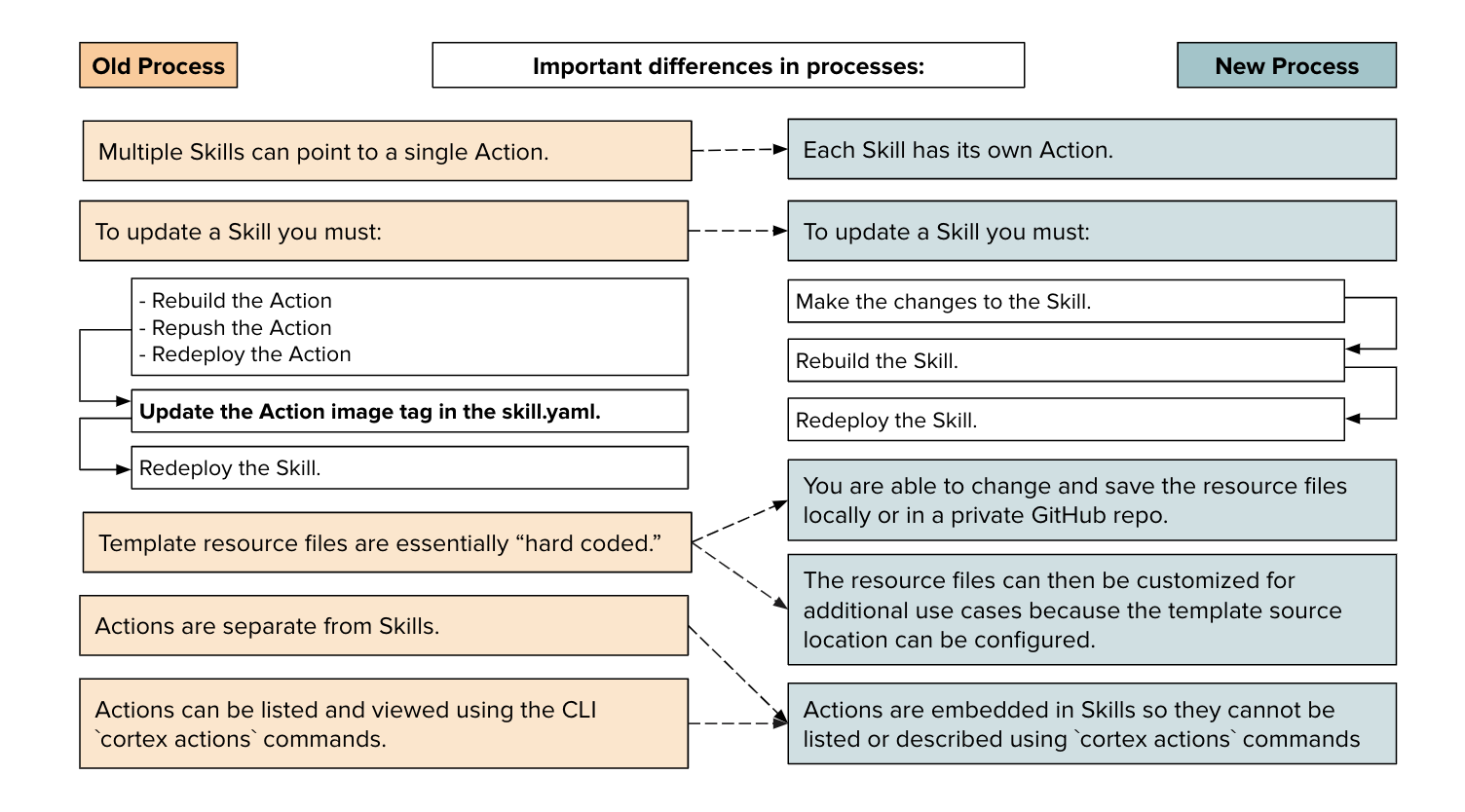 Namespace is no longer required in the naming convention for Cortex components.

To remain backward compatible the / is allowed on the backend, but it will not be allowed when creating new components in the Console.

You will not need to make changes to existing Skills, Agents, and connections.

You will be able to export and import Skills with namespaces.

This change has been made to accommodate the 60 character name limit for Kubernetes resources.

NOTE: Namespace continues to be used in the runtime by cloud providers and Kubernetes.

Datasets will no longer be used with connections for Agent creation. Instead a new component Data Sources has been added to Cortex Fabric. Data Sources provide flexible schema creation and data ingestion for Profiles and Agents.

Because triggers were configured as a component of datasets, they have also been deprecated. Job triggers may be set in Kubernetes.

No migration is required; install Cortex Fabric v6 to have access to these changes.

The 5.0.30 release is the final version of Cortex Fabric that is compatible with the standalone Desktop installation of Studio. The Studio Agent Composer and Profile tools can now be accessed in the new web-based Console that integrates Cortex components. The Console is available at https://api.<dci-base-domain>.

The advantages to using the new Console are:

A few things with regards to Profile-of-one have changed with the release of DCI v5.0.24.

The model for documents in the attributes collection in cortex-graph database has been changed to support bulk insertion.

Previously, on DCI versions prior to v5.0.24, the versions of a profile were incremental. They started at 1 and were incremented by 1 every single time a single attribute was modified.

With the release of v5.0.24, the versions of profiles have become the unique epoch timestamps that the system learned new attribute(s) about a profile. Accordingly, multiple attribues could have been updated within the same version since the system can learn different things about a profile at the same time.

Rebuilds Are No Longer Needed#

Previously, on DCI versions prior to v5.0.24, users of the graph service used to rebuild their profiles when they updated a Profile Schema.

With the release of v5.0.24, rebuilds are no longer required.

Previously, on DCI versions prior to v5.0.24, deleting a schema would delete all the profiles associated with the schema.

With the release of v5.0.24, deleting a schema does not delete any data related to specific profiles.

Previously, on DCI versions prior to v5.0.24, users had to save a schema before submitting events in order to create profiles.

With the release of v5.0.24, the order in which schemas are saved and events are submitted does not matter, as long as both actions are performed.

Previously, on DCI versions prior to v5.0.24, users could submit "informal" events, and they would still result in the creation of the appropriate attributes. This was due to the backend formalizing these events.

With the release of v5.0.24, these informal events no longer result in the creation of profile attributes if they are submitted straight to the backend. Instead, the formalization of these events is now being done by the cortex-python-profiles lib. However, this functionality will retired soon. Users of cortex-python-profiles lib that are still leveraging these informal, deprecated event structures will see the following error:

Additionally, users of the cortex-cli can no longer leverage these "informal" events.

Warning for Events Missing From Schema#

Previously, on DCI versions prior to v5.0.24, when building profiles against a specific schema, users could submit events that would not build any profiles since they are not mentioned in the schema, and the backend would accept them and do nothing with them.

With the release of v5.0.24, users of the cortex-python-profiles lib will get a warning when submitting events not mentioned in the schema they are attempting to build profiles against. This error looks something like this:

With the release of v5.0.24, the usage of cortex_profiles.build.attributes.builders.AttributeEntityEventBuilder within the cortex-python-profiles library has been deprecated. Users should instead formulate the appropriate Entity Events based on the structures instead of using these builders.

When a DCI instance is upgraded to v5.0.24, the Profile-of-one database is migrated as well so that users can access the profiles they built prior to upgrading their DCI installation.

If for any reasons, maintainers of the DCI installation decide that it needs to be reverted to a version prior to v5.0.24, any profiles built using the new version need incompatible with the older DCI versions and must manually be removed from the Profile-of-one database.

The Cortex Python module provides an API client library to easily integrate with Cortex Fabric. Refer to the Libraries Reference Guide documentation for details on how to install the library and the methods and classes available.

The cortex-python library is available on PyPI.

To install the optional components:

The way Client functionalities can be imported has changed.

ConnectionClient can be used to save and retrieve connections.

Cortex magics can be used only when the optional builders dependency is installed:

Deprecations and Removals from cortex-client#